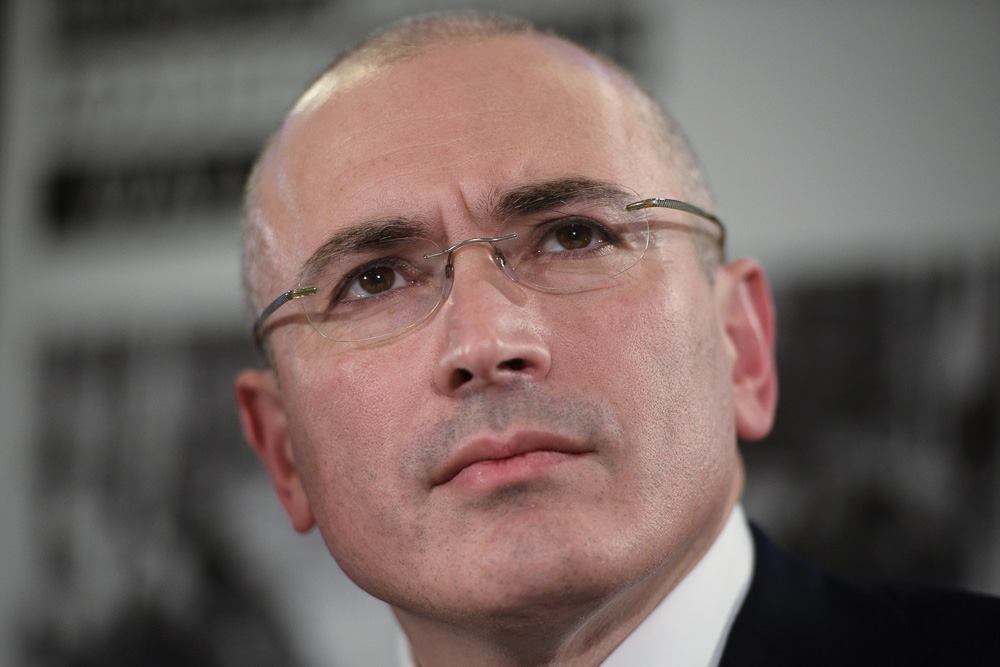 Justice for Journalists and Russian Revanchism

A conversation with Mikhail Khordokovsky

A top Putin foe dishes on threats to press freedom from Moscow, the Kremlin’s long arm in Africa, and what Russia makes of Donald Trump.

Jeffrey Gedmin, the editor-in-chief of The American Interest, recently sat down with Mikhail Khodorkovsky in London to discuss his new foundation, Justice for Journalists. (Full disclosure: Jeff is a board member.) Read on to learn how three suspicious killings in the Central African Republic served as the genesis for his new foundation, why Khodorkovsky values independent journalism in the first place, and what lessons he draws from his decade in prison.

Jeffrey Gedmin: Why is journalism a priority for you? Why did you undertake this new foundation?

Mikhail Khodorkovsky: I personally encountered a situation where journalists executing their job were killed. I had heard a lot about stories like this, but this was the first time when I personally encountered one. And I started to ask questions, I got interested in how often does this happen. As it turns out, it happens a lot. So I was curious to find out how often the investigation yields results—and even how often the case is investigated, to start with. As I found out, this happens quite rarely. And I thought it’s really important to demonstrate that investigations of journalist killings should take place, because if they do take place, they raise the cost for the killers. If we cannot completely protect the journalist in the first place, then at least we could raise the cost.

JG: Can you say a word now about the incident in the Central African Republic? As has been publicly reported, three Russian journalists employed by your Investigation Control Centre—Orkhan Dzhemal, Alexander Rastorguev and Kirill Radchenko—were working on an investigative documentary there when they were ambushed and killed. What happened, and why does that pose a political problem?

We will reveal the further information we have on January 10.

JG: What was the name of the private military contractor?

For the Russian authorities and the authorities of the Central African Republic, of course, it would be beneficial to write off the murder as a banal robbery. But we are sure that this was not merely a robbery.

JG: Can you say a word about the relationship between the gentleman you mentioned, Mr. Prigozhin, and Vladimir Putin? I understand Prigozhin is a man of many hats—known as “Putin’s cook” for his origins as a restaurant entrepreneur; allegedly the supervisor of the St. Petersburg-based Internet Research Agency, better known as the Russian troll farm, and so on. Can you explain how he found his way into Putin’s inner circle, and how his work with the Wagner Group relates to his other roles?

MK: Mr. Prigozhin is included in the closest circle of Mr. Putin, and has been for the course of more than 10 years. During his work in Saint Petersburg, Putin mediated between local criminal groups, local corrupt police, and other security agencies. Prigozhin was deeply involved in these communities and the two shared many mutual friends.

Wagner and the troll farm, Olgino, represent different forms of the work carried out by the same intelligence services.

JG: Help me to understand the structure and purposes of the Wagner Group, then. Is this a front for Russian army troops? A group of volunteer mercenaries that fight for the Kremlin’s cause? Is it meaningfully separate from Russian military command structures, or directly supervised by the GRU?

MK: Prigozhin’s Wagner Group is now in conflict with Shoigu [the Defense Minister]. This is what we know. Recruitment of Wagner employees falls under the control of the FSB. We know this as well. The rest is still speculation.

JG: The Wagner Group has also been implicated in Russia’s military activity in Syria. Can you discuss its role there? And with U.S. troops apparently set to withdraw, what role do you foresee Wagner playing in the future?

MK:  To some extent, the role of private military contractors in Syria in the future will depend on the development of relations between Prigozhin, Shoigu, the GRU, and the FSB. We will follow the development of this situation. But if all goes well, such companies will corrupt the locals and will seize anything that will help them get money or their “cut” from the Russian budget.

JG: Let’s get back to the Central African Republic. What’s the motive in a place like that? Is it political? Is it strategic? Is it commercial—whether for the Russian government or for a small circle of private and rich men?

And we are very concerned that one reason for the broad involvement of these paramilitary groups could be the preparation of killers for hire, or mercenaries, to resolve certain political issues. Our political interest in the matter is to legalize this paramilitary group inside Russia so that they step out of the shadows. We consider it very important that these groups and their actions are being regulated by the law and therefore they fall under control of society.

JG: As you know, President Putin was asked about the Wagner Group at his year-end press conference on December 20. He seemed to feign ignorance about its activities in Donbas and Syria, while stating that such private military companies should operate within the law. I quote: “If this Wagner group is violating anything, the Prosecutor General’s Office should provide a legal assessment. Regarding their presence abroad, if they don’t violate Russian law, they have the right to work and push their business interests anywhere in the world.” How do you respond?

MK: Putin is, as always, cunning. We do not have any laws on private military contractors, but there are punishments for mercenaries. It seems beneficial to Putin to have illegal armed groups under the control of the “inner circle.” There are many of these groups, not only Prigozhin’s. And it would be dangerous for a country to turn thousands of armed and trained killers into outlaws.

JG: Apart from the specifics of this case, you have a broader interest in independent journalism. Why is that so important for you? You’re a businessman.

MK: I don’t trust any government. I believe that any government without checks and balances from the part of society will only work in its own interest, by which I mean the interest of a group of bureaucrats. Society has different mechanisms for checking power; in some countries, there are more and in some there are fewer.

JG: So how did you come to this conclusion that the primary function of independent journalism isn’t to educate or inform but to hold government accountable?

From my childhood, I saw even during Soviet times that when people had problems with bureaucrats or with government officials, they would write to the newspaper, and if they were lucky enough to interest the newspaper in that story, then they would achieve a result that would have been unachievable without the help of the media.

Last month in Hamburg, there was a CDU party conference in Germany that begin plotting out the future after Angela Merkel. How important do you think Merkel has been in keeping Europe on a course of opposition to Vladimir Putin? She’s an East German, and in many cases she’s been stronger on sanctions than other Europeans, maybe even sometimes the Americans. Do you have concerns about post-Merkel Germany?

MK: I believe that today when America has distanced itself from the situation in Europe, the only person who is significantly influencing Europe is Angela Merkel. This is relevant in many ways, but specifically as regards relations with Putin. No doubt, her departure will put forth the question as to how the relationship between Russia and Europe will change. I don’t have an answer to the question of how they will change. But it raises serious questions, very serious questions.

JG: So then the companion question is about United States and our President, Donald Trump. Americans are interested in the Mueller investigation, as well as the Trump business and its possible past financial links to the Russian government. Do you have anything to say about speculations about Donald Trump’s relationship to Russia, past and present, and how he best understands his relationship to Vladimir Putin?

So it’s just sufficient to give you one example, and that is the applause in the State Duma after the news broke that Trump won, and the entire Duma gave a standing ovation. And because the Russian State Duma is not in any way the equivalent of the U.S. Congress—it’s more like a theater which includes Putin’s marionettes—well, these marionettes were displayed on Russian public television channels for the performance, standing up in ovation to celebrate the victory of Trump.

And the second thing that was also projected on Russian TV was when Mr. Trump met with Mr. Putin in Helsinki. It was demonstrated that Mr. Putin was putting Trump on a lower level—that Trump was playing second fiddle to Putin. This is how it looks from the point of view of a Russian citizen.

JG: One more question. It was about 15 years ago that you went to prison, and a little over five years ago that you were released. And we all learn things from deeply dramatic and painful experiences. What do you think about this time? How do you reflect on it? How did this large part of your life that you spent in prison change you?

MK: So I spent time in jail between the ages of 40 and 50, and any person would change during this period of life. So it’s hard for me to say what specifically prison added to the change that any normal person would undergo anyway. The fact that I have softened in my approach in dealing with people, it could be the result of me being in prison or maybe it’s just a matter of me being older.

The fact that I’m not interested at all in business, this is probably the result of me being in prison because I realized that business occupies so very little of one’s human life. And in my previous, prior-to-prison life, I overvalued that part of my life.

Editor’s Note: This transcript has been edited and re-arranged for clarity.