Myroslava Gongadze: ‘Thinking that my husband’s murderer may go free makes me sick’ – Justice for Journalists 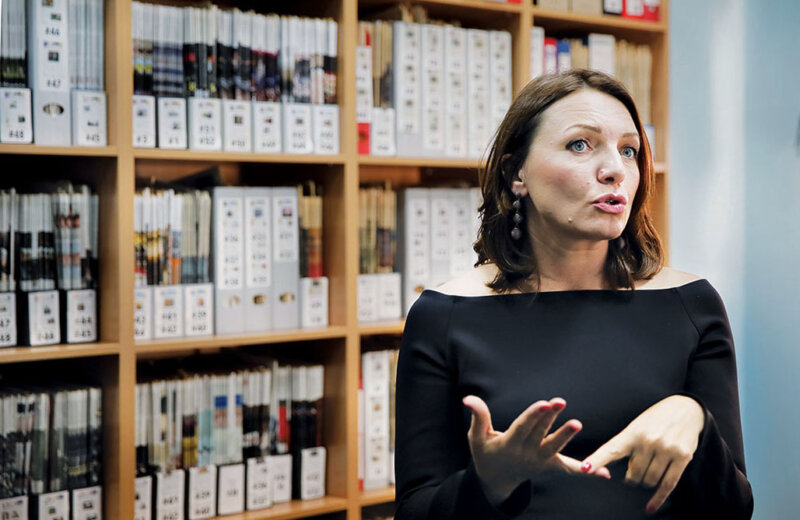 Myroslava Gongadze: ‘Thinking that my husband’s murderer may go free makes me sick’

Editor’s Note: This story is part of a special project by the Kyiv Post, “Dying for Truth,” an online database and series of stories documenting violence against journalists in Ukraine. Since 1991, when the country gained independence from the Soviet Union, more than 50 journalists have been killed across Ukraine. Most of the crimes have been poorly investigated and the killers remain unpunished. The project is supported by the Justice for Journalists Foundation. Content is independent of donor.

Full article is available on the Kyiv Post web-site.

Ukrainian journalist Myroslava Gongadze says her life is split in two: before and after the murder of her husband Georgiy Gongadze.

The killing of Georgiy, the prominent journalist and co-founder of the Ukrainska Pravda news site, shook Ukraine to its core. It still resonates today.

On Sept. 16, 2000, former Interior Ministry General Oleksiy Pukach and three of his subordinate officers kidnapped, beat and killed the father of her two children, then beheaded him.

Myroslava Gongadze promised that she would do everything possible to push for justice in her husband’s killing. Nineteen years later, she is still trying to make the Ukrainian authorities bring the organisers of his killing to justice.

“We’ve got partial justice,” she told the Kyiv Post on Sept. 9.

Indeed, in 2013 Pukach was sentenced to life imprisonment. Earlier, in 2008, his three accomplices were handed prison sentences.

However, even 19 years after the murder, the Prosecutor General’s Office of Ukraine is still investigating who might have ordered the journalist’s killing amid an abundance of evidence that points to ex-President Leonid Kuchma and his top subordinates. Kuchma and others implicated have always denied involvement.

And not only are the organizers free, but Pukach could also be free as well very soon.

Pukach is appealing his sentence, arguing he didn’t mean to kill the journalist. If a judge on Oct. 9 supports his claim, he can be released in court.

“When I heard I could meet Pukach on a street, I felt I would not come to Ukraine anymore. He is a dangerous man,” said Gongadze, who lives in the

United States and leads Voice of America’s Ukrainian Service. “Even thinking that Pukach could be out of jail makes me sick to my stomach.”

In an interview with the Kyiv Post in August, Pukach claimed he didn’t plan to kill Gongadze. He only admits to “overstepping his authority” and says he should be free because he has already served the full sentence for that.

“They had no right to give me life in prison,” Pukach said.

Pukach has long been trying to appeal his life sentence. In 2016, the Appeals Court of Kyiv upheld his sentence. However, in 2017, he filed a cassation claim to the Supreme Court of Ukraine, asking to reduce his sentence to 15 years in prison.

A year later, the court satisfied his other request and recalculated his sentence according to the so-called “Savchenko Law.”

For Pukach, it means that de jure he served about 18 years, while in reality he was only arrested in 2009.

“If the court satisfies his cassation claim, he could not only be released from jail but also has a chance to demand financial compensation from the state for his overstay in prison,” Valentyna Telychenko, Gongadze’s lawyer, told the Kyiv Post.

For three years already, the Supreme Court of Ukraine has been considering Pukach’s claim. On Sept. 4, the court postponed the next hearing in his case until Oct. 9.

But Telychenko doubts that even then the judges will start considering the case.

Since 2017, Pukach has been frequently changing his defense lawyers, Telychenko said. And the court grants every new lawyer time to study the case.
“Then they drop the case and it all starts again. This is a very old way of dragging out the case,” Telychenko said.

Telychenko has been representing Gongadze since 2009, when investigators captured the ex-general, who had been hiding from justice for six years.
She says that Pukach got a fair sentence as he had not only admitted that he murdered Gongadze, but also showed the places where he buried the body and the head of the journalist.

But Pukach denied that to the Kyiv Post in August. He said he was forced to take the blame because of threats to his family. He also expressed no regret about what happened to Gongadze. He claimed the journalist was a spy, who wanted to overthrow Kuchma, who at one time Pukach blamed for ordering the murder.

The tapes featured a voice that sounded like Kuchma ordering his allies in power to deal with his prominent critic, Gongadze. Although the tapes feature no direct order to kill Gongadze, they proved Kuchma was involved in the killing, Moroz said in 2000.

Kuchma has repeatedly denied any involvement in the murder. In 2011, the Prosecutor General’s Office opened and then quickly closed the case against the second president of Ukraine. The court refused to consider Melnychenko’s tapes as evidence against Kuchma.

But Myroslava Gongadze isn’t going to stop: She keeps pushing to find and punish the organizers of the murder.

“So many people around me kept telling me to not even start because it is impossible. I said I would do what I can to push for justice,” Myroslava Gongadze says.

In 2005, she won a case in the European Court for Human Rights that proved the Ukrainian justice system was not doing enough to solve the murder of her husband. She also received significant support in the international community and the media.

However, after Pukach’s sentence delivered partial justice in 2013, the public attention to the case died down. And the official investigation still has not managed to either prove Kuchma’s involvement in the case or find who else might have ordered the murder of Gongadze.

The investigation is still ongoing, the press service of the Prosecutor General’s Office told the Kyiv Post on July 19.

“The prosecutors have been investigating former top officials of Ukraine who were trying to get political and economic preferences for a circle of people close to the authorities. To achieve their goals, those people violated the law in different ways, including murdering Gongadze, abusing power, and illegally wiretapping the office of the president of Ukraine,” the press service said.

However, Myroslava Gongadze says she is glad they’re working on it but she isn’t convinced they will succeed.
“There was never enough political will to solve this murder,” she said.

Every new president or prosecutor general of Ukraine promised to solve the murder.

“Apparently, it is not that easy,” she added. “Furthermore, the culture of political corruption in this country is so deep that they have used (it) to hide each other’s crimes.”

Despite the fact that the investigation has never managed to prove Kuchma’s role in the murder of Gongadze, his wife is confident that the second president of Ukraine bears responsibility for the murder.

“I think that Georgiy was murdered because President Kuchma was talking about him in his office. I heard those tapes, I recognized those voices,” she said. “But the question remains: Did he want Georgiy to be murdered, or somebody listening or recording those tapes did something, organized something to make it look like Kuchma was responsible.”

Soon after Gongadze was murdered, Myroslava and their two daughters received political asylum in the United States. Being the widow of a murdered journalist has been a difficult challenge.

Because of the constant hard work, fear and the lack of justice in the case, she even thought of giving up and changing her last name.

“I was so tired. However, I realized no one else will push for an investigation. I could not dismiss my past, so I decided to embrace it,” Gongadze said.

However, that was far from easy. Besides pushing forward the investigation of her husband’s murder, she had to work several jobs to support her children and raise them as normal people.

“All these 19 years, I was like a tight rope, I could not release my emotions,” Gongadze said.

During a training on post-traumatic stress disorder at the Harvard University in 2018, she was able to talk about her feelings for the first time.
“Only then I realized how strongly damaged I was by all that (had) happened,” she recalled.

Gongadze’s daughters Nana and Solomia, 22-year-old twins, have grown up as solid people, their mother said. However, the murder of their father has deeply traumatized them too.

“I see the signs of something broken in all of us because of this trauma. I am trying to work on those emotions but my views of the world, the relationship around me is different after Georgiy was murdered,” she said.

Gongadze has been fighting for justice all these years not just for her husband, but for all journalists who are still being killed all around the world.
“In our case, the justice was restored only partially, but that is still a lot more than most of the journalists get,” she said.

Since 1991, when Ukraine became independent, at least 50 journalists were killed in the country. In 13 cases, the Committee for Protecting Journalists confirmed the journalists’ professional activity was the motive. Almost none of them are completely solved.

“I want to show the example for other journalists and their families — keep trying to find justice,” Myroslava Gongadze said.