Editor’s Note: This story is part of a special project by the Kyiv Post, “Dying for Truth,” a series of stories documenting violence against journalists in Ukraine. Since the country gained independence from the Soviet Union in 1991, more than 50 journalists have been killed across Ukraine — including eight since 2014. Most of the crimes have been poorly investigated, and the killers remain unpunished. The project is supported by the Justice for Journalists Foundation. Content is independent of the donor. All the stories in the series can be found here.

Journalist and writer Oles Buzyna was a famous figure in Ukraine.

A long-time contributor and, briefly, the managing editor of the Segodnya newspaper, Buzyna was a historian, writer and frequent guest of various Ukrainian talk shows, He liked to say that the only thing he stood for was the truth.

But that vision of “truth” earned him the reputation of a controversial, openly pro-Russian commentator who publicly denounced everything Ukrainian. For that, he was frequently attacked and even beaten by his ideological opponents from the nationalistic and patriotic camps. Then, one day, it was more than a beating.

Buzyna was shot dead near his house in Kyiv on April 16, 2015, when he went out for a run. Two attackers wearing masks drove by and shot him multiple times.

Several hours later, Russian President Vladimir Putin called Buzyna’s assassination “a political murder” during his annual press conference held the same day. He claimed it wasn’t the first political murder in Ukraine and blamed Ukrainian authorities for being unwilling to investigate them.

The pro-Russian journalist’s murder in Kyiv during the second year of Russia’s war against Ukraine shook the country.

While many saw Buzyna as an openly pro-Russian provocateur and thought that he was killed by the Kremlin to blacken the Ukrainian government’s reputation, more pro-Russian Ukrainians saw him as an opposition journalist and writer killed for his views.

“The investigators suspect Polischchuk and Medvedko conspired, prepared and committed the murder of the journalist (Buzyna) at their own initiative and based upon opposing political views,” the Kyiv Prosecutor’s Office press service told the Kyiv Post.

Prosecutors say that phone tracking and wiretapping confirmed that, not long before the murder, both suspects were moving around Kyiv together. DNA found on the clothes that the attackers abandoned after the crime matched the suspects.

However, both Medvedko and Polishchuk deny killing Buzyna. Their lawyer, Sergey Voichenko, said his clients did not know each other before their arrest. Furthermore, according to him, numerous witnesses confirmed they were both in Dnipropetrovsk Oblast the day Buzyna was murdered, while the police say they tracked their phones in Kyiv.

Voichenko also said police planted the evidence in the case and took the DNA samples of Medvedko and Polishchuk by force.

“In this case, we can’t talk about justice, but we clearly can talk about the falsification of evidence. Medvedko and Polishchuk were set up,” the lawyer said. “Even before we started working on their case, our defendants were told not to work with us, but instead to admit guilt. In return, they were promised to receive minor sentences and were even told that society would be grateful to them because Buzyna was such a bad man.”

In 2017, the Kyiv Prosecutor’s Office concluded the pre-trial investigation of Buzyna’s murder and sent all case materials to the court. If found guilty, both Medvedko and Polischchuk face life sentences. Both suspects are currently not in jail, but come to the court hearings in their case.

Buzyna had a reputation as a provocateur who publicly denounced almost every person, tradition, tragedy or event sacred to most Ukrainians. He depicted Ukraine’s national poet, Taras Shevchenko, as an alcoholic, loser and all-around unpleasant individual in his 2000 book “Taras Shevchenko the Ghoul,” which brought him notoriety. Although Buzyna claimed that he tried to show Shevchenko as a “real human” in this book, the Ukrainian Union of Writers proclaimed the book Ukrainophobic and hostile to the nation. Buzyna continued to stand up for his beliefs despite verbal and physical attacks against him.

He identified as a Ukrainian but said that Ukrainian patriots were trying to suppress Russian culture and language.

He also stated that Ukrainians, Belarusians, and Russians were the same nation. He proudly made rude homophobic remarks, supported the idea of plural marriage, openly opposed Ukrainian nationalism and called Russia’s war against Ukraine in the Donbas “a civil conflict.”

Buzyna was born and raised in the family of a KGB officer who continued to serve in the archive of the Security Service of Ukraine after the collapse of the Soviet Union. Buzyna was also proud of the fact that his grandfather served in the Russian Empire’s White Guard. He even dressed in the White Guard uniform for historical reconstruction events.

He started working in journalism in the 1990s. He worked in the popular newspapers Kievskie Vedomosti and 2000 and in glossy magazines Natalie, XXL and many others. He also worked as a host and appeared as an expert on various TV shows. Oles Buzyna, Ukrainian writer and journalists grabs Femen activist Inna Schevchenko after she threw a cake in his face during the presentation of his book “Bring Women Back to the Harems” in Kyiv in March 2009. (UNIAN)

In 2006, he joined Segodnya, Ukraine’s biggest daily newspaper, as a contributor, mostly writing controversial opinion pieces about Ukrainian history. He claimed that he was debunking the widespread myths created by “the Ukrainian propaganda machine.” However, other historians and experts accused Buzyna of spreading conspiracy theories. In January 2015, he was appointed the managing editor of the Segodnya newspaper.

“I got a feeling that he was not happy with the new appointment,” Andriy Tanasiuk, a former Segodnya newspaper journalist told the Kyiv Post. “When I came to congratulate him, the only thing he said was that, with this post, he would get a much bigger headache.”

Tanasiuk met Buzyna in the 1990s when they were both working for Kievskiye Vedomosti. Then they worked at Segodnya together.

However, his appointment caused huge problems for the whole newsroom.

“We started getting calls about a bomb in our building like every week. It was winter and the whole newsroom was constantly evacuating. We had police and firefighters coming frequently,” Tanasiuk said.

He added that everybody understood this was connected to Buzyna’s appointment.

Soon after he became managing editor, Buzyna said he was going to turn Segodnya into the newspaper in opposition to the government of then-President Petro Poroshenko.

However, in March 2015, just three months after his appointment, Buzyna left the post. While Segodnya said that he left to focus on his writing career, Buzyna said he quit because of censorship.

In a statement he published on his website, Buzyna said that Media Group Ukraine, owned by billionaire oligarch Rinat Akhmetov, forbade Segodnya, its flagship publication, to criticize then-Prime Minister Arseniy Yatsenyuk. He also complained that he had no control over the Segodnya news website, only being in charge of the print run. And Segodnya’s publishers allegedly forbade him to speak to the press and give comments about the attacks on the newspaper after his appointment.

Olga Guk-Dremina, who was the chief editor of Segodnya at the time, didn’t answer the Kyiv Post’s request for comment.

Buzyna quickly found new employment. He was hired to join Vesti, a newspaper critical of the Ukrainian government led by Igor Guzhva, another former editor of Segodnya and a close friend of Buzyna. He was to start work on April 20, 2015.

He was murdered four days before that.

Poroshenko said Buzyna’s murder was a provocation against Ukraine and called for a prompt investigation of the journalist’s assassination.

Buzyna openly opposed Ukrainian nationalism and called on the Ukrainian government to outlaw it.

At the same time, he proudly called himself “a little Russian,” using an insulting and outdated term for Ukrainians that was widespread in the Russian Empire. He was a critic of the EuroMaidan Revolution, which ousted Kremlin-backed President Viktor Yanukovych. Buzyna claimed that the uprising sparked the war in the Donbas.

His claims angered many in Ukraine. In 2000, he was beaten near Podilskiy District Court of Kyiv. Later an activist of the Femen movement threw a cake in his face at the presentation of his book “Send Women Back to Harems,” another provocative work where he defended polygamy.

Buzyna’s friends and colleagues said he believed in all the things he wrote about.

“Ukrainian nationalism gave a historical chance to a bully. And a bully used that chance. It is hard to be an aristocrat, you have to be well-educated and be faithful to your monarch,” Buzyna wrote about nationalists on his website. “An aristocrat won’t spit on the floor and drink cheap vodka. He won’t pretend he is starving for Ukraine on Maidan and eat honey in the tent at night.”

Moreover, after he was killed, some nationalistic organizations made statements expressing gratitude to the people who murdered him.

In 2015, activists pulled down the memorial plaque from the building where Buzyna lived, claiming it was installed illegally. In place of the memorial, the Right Sector nationalist organization hung another plaque with portraits of Polishchuk and Medvedko. The board said they were victims of police repression.

“Medvedko and Polishchuk didn’t even read Buzyna’s writing. He was not famous among their inner circle,” Voichenko said. 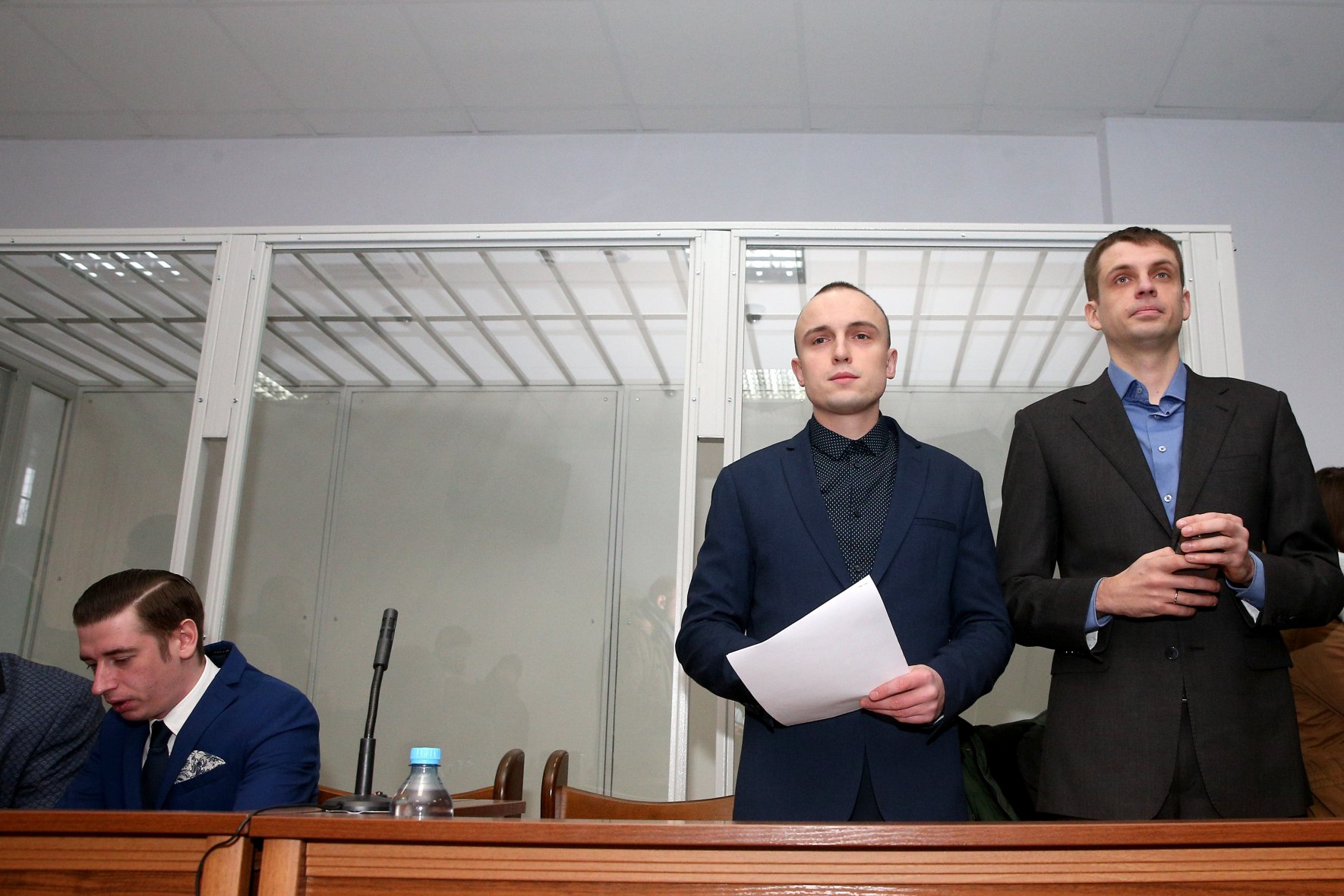 Denys Polischchuk (L) and Andriy Medvedko, suspects in the 2015 murder of Oles Buzyna, a pro-Russian controversial journalist, attend a court hearing in their case in Kyiv on Feb. 9, 2018. (UNIAN)

Both suspects were arrested in 2015 and placed in the pre-trial detention center but soon released. The court is still hearing the case.

Prosecutors claim the evidence against both suspects is strong: Both cell-tower data and DNA tests point to them.

However, Voichenko claims the investigators got the DNA samples unlawfully and could have falsified the evidence.

The lawyer says that, during the first search of the car that the murderers used and then abandoned, a Ford Focus, police found no clothes, but clothing later appeared among the evidence.

Several days later, the police took the DNA sample from Medvedko – by force, according to the lawyer. It was soon found on the clothes that Voichenko claims someone brought to the police.

Almost a year after the murder, the police said Polischchuk and Medvedko voluntarily gave DNA samples again for the second test ordered by the court. However, Voichenko said, in fact, police again took the DNA by force after beating both of his clients.

Medvedko and Polishchuk couldn’t be reached for comment. Voichenko refused to make his clients available, saying he will speak in their place.

After that, the Interior Ministry’s forensic tests again confirmed that the DNA samples matched the evidence. In November 2017, the prosecutors’ office ended the pre-trial investigation and passed the case against Medvedko and Polischchuk to court. Since then, dozens of court hearings have taken place. The next one is planned for Jan. 28.

“We have been asking the court to hear this case faster. But the judges and prosecutors keep dragging out the process. It seems to me that no one wants to make the ruling in this case and admit that Buzyna’s murder remains unsolved,” Voichenko said.

The Prosecutor’s Office of Kyiv said that investigators consider it possible that more people might have been involved in Buzyna’s murder. That’s why, while the case of Medvedko and Polishchuk is in court, investigators opened a second set of criminal proceedings into the murder.

“They are still investigating (Buzyna’s murder) to this day,” the prosecutor’s office press service said.