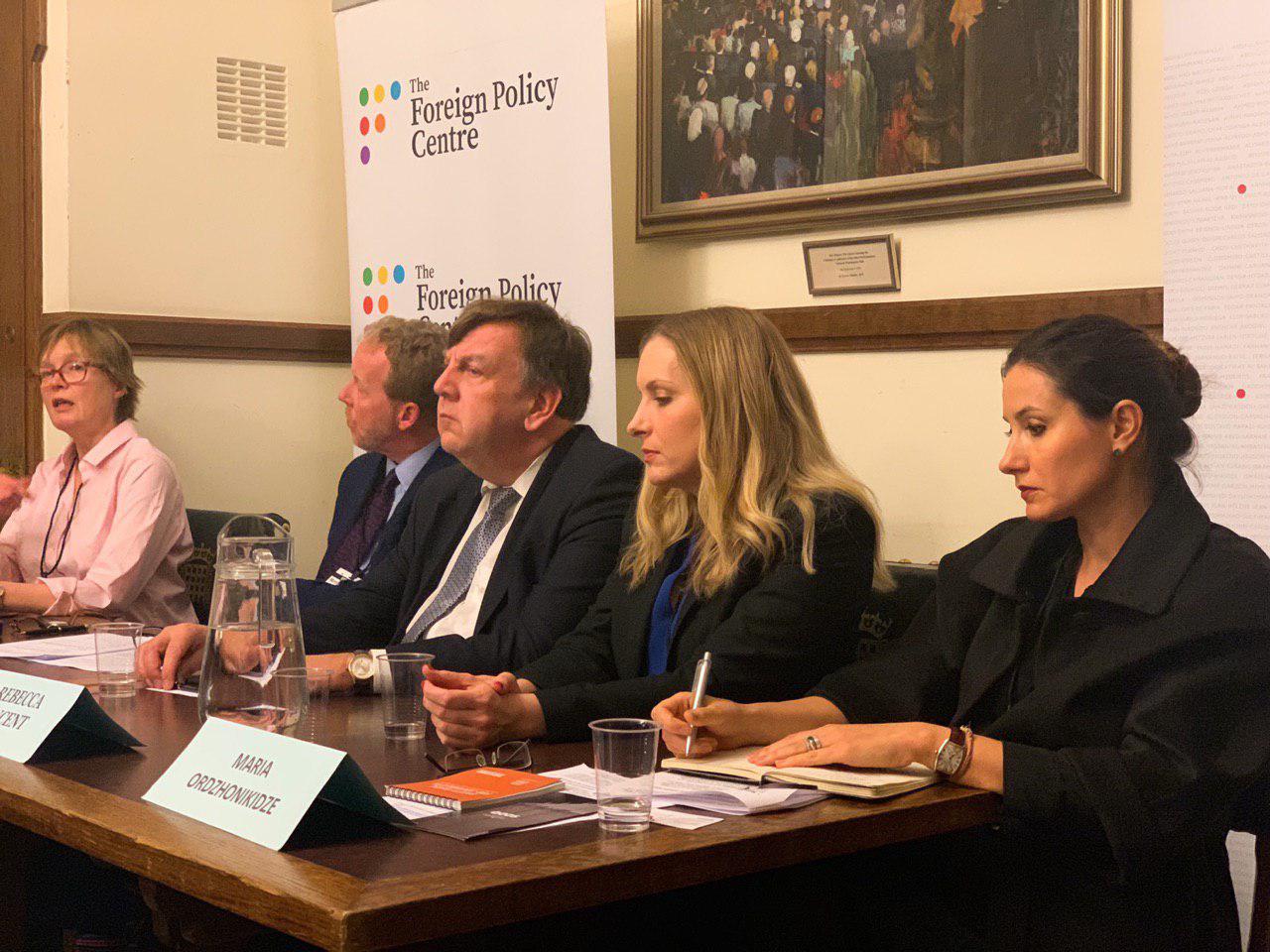 The statement of Justice for Journalists Foundation Director, Maria Ordzhonikidze

On 25th of March, Justice for Journalists Foundation together with The Foreign Policy Centre hosted an event “Ending Impunity: How to improve safety for journalists at risk and deliver justice for crimes against them” in the British Parliament.

Justice for Journalists Foundation Director, Maria Ordzhonikidze presented a statement on risks that media workers face worldwide and mechanisms of their prevention and management. Read the full speech below :

Despite considerable successes in fighting terrorism and extremist worldwide, the level of danger and the variety risks that both professional and citizen journalists are facing today is constantly rising.

In the last three years the deaths resulting from terrorist attacks are subsiding – roughly 27% from 16 to 17 and 35% from 17 to 18. At the same time, the numbers of journalists killed doing their job continues to be high. According to the statistics released by our distinguished colleagues in Reporters Sans Frontiers, the number is over 80 people worldwide, and not dropping. Yet impunity for crimes against journalists remains at 90%.

While places like Syria, Afghanistan, Mexico and Yemen remain by far the most dangerous places to live and report from, 2017 and 2018 saw a rise of journalists’ murders in OSCE member states. Cases include Kim Wall in Denmark, Daphne Karuana Galizia in Malta, Jan Kuciak in Slovakia, Victoria Marinova in Bulgaria, Jamal Khashoggi in Turkey, 5 media personnel gunned down in Maryland, US, 3 Russian investigative journalists lured and murdered in CAR.

Numerous cases of harassment and attacks on journalists are reported in otherwise peaceful places like India, Pakistan, Philippines, and even countries like Germany (26 in 2018 alone) or Italy 19 – the same number as in Russia, according to the Council of Europe’s report.

Strikingly, nowadays more reporters are killed or attacked for covering their communities, cities and countries than for reporting in armed zones. Corruption, populism, financial crimes, diminishing accountability by authorities creates numerous other challenges and risks that both professional and citizen journalists are facing today.

Journalists are not only fined or silenced, but also detained for covering protests and citizen journalists for uncovering and criticising the crimes of various corrupt regimes.

According to RSF statistics, we see over 300 of media workers imprisoned today, with Saudi Arabia, Vietnam, Egypt and China leading the least. Turkey has the worst record in the Council of Europe member states with at least 110 journalists in jails.

Among other quasi-legal ways of silencing the journalists are defamation lawsuits, the seizure of personal and professional records in the name of national security, pressure from government officials.

Terrorism and extremism are increasingly used as a pretext to curb free speech by non-democratic governments. For example, the recent laws on censorship almost simultaneously introduced in countries like Russia and Egypt (combined population almost a quarter of a billion people) now enable media regulators to block any media without court orders if they suspect the reporting is “fake news” or “dangerous for national security”.

While murders, kidnappings, physical attacks and arrests are the most obvious types of risks to journalists and media freedom in general, there are increasingly other mechanisms exercised against journalists to force self-censorship.

5. Online Harassment and Cyber-bulling became increasingly common and there is now ongoing discussion on how the social media platforms can exercise some sort of control over this. Intimidating practices include cyber-stalking, abuse, insults, dismissive trolling, hate speech and even doxing. Again, it is one thing when all of this is initiated by some petty criminals who are a subject of a journalistic article, but totally different when there are mighty state or quasi-state actors behind such attacks.

As we can see from the above facts, the sources of risk for journalists are now changing. According to CoE platform, in 80 alerts (57%) – gangsters and terrorists are overshadowed by the state actors as the main risk sources for media workers.

What Can and Needs to Be Done?

I will leave it to my co-panelists today to discuss the role of international organisations like UN, OSCE, ECHR, ICC and Council of Europe and what is being done by introducing new conventions and other important joint documents.

I would like to focus on what professional and citizen journalists, along with media unions, human rights NGOs can and should do to protect themselves from the ultimate censorship and such mighty enemies as the corrupt states, criminal organisations and oppressive laws.

1. Raising awareness and public education about the problem

The fact that more journalists are being killed or attacked today for reporting from their home countries that in war zones does say a lot.

Awareness of the fact that they are operating in a hostile environment, needs to be raised among the professional and citizen journalists who just seem to have grown used to thinking “well, this is how the things are here, and it’s normal”

2. Integrating, analysing the data about the types and geography of risks to the media profession and making it publicly accessible. This risk mapping will hopefully enable media professionals and citizen journalists to realistically assess the threats that their own place of work presents.

Again, for someone working in India or New Zealand that would not be an obvious undertaking, however, the extent with which anti-extremist rhetoric is being used to curb free speech is notable.

3. Where to seek help. Once we’ve established there is a problem and made media workers aware that they are, in fact in the epicentre of this problem, we need to help them find the knowledge and resources to tackle it.

Establishing safeguards for media workers and directing them to existing resources is crucial and should be a never-stopping work in progress, as new people are joining the profession and new challenges emerge all the time.

There is a constant lack of funds for updating, adaptation to local specifics and translation of existing safety guides and manuals. Providing help for journalists globally with access to the existing networks and resources, as well as adaptation of those to the local specifics is crucially important.

Presumption here is the same: “I don’t need safety training, I am working in the peaceful area”. However, when there is awareness of the problem, the surveys demonstrate high demand for certain specific skills in media workers:

First aid was overwhelmingly rated as one of the most useful of available training topics (79%). Medical knowledge (55%), personal safety (49%), risk and assessment management (38%), vehicle security/travel safety (37%), hostage survival (37%), and digital security (37%) were the next most highly ranked among those who received training on these topics.

After discussing recent trends, emerging risks and prevention mechanisms, I would like to briefly introduce JFJ that aims to address some of the existing challenges faced by independent media today.

Circumstances behind creating our Foundation are tragic, but by far not unique. Some of you must have heard about the group of Russian journalists that was lured to, ambushed and gunned down in CAR, where they went to investigate the murky dealings of state-funded mercenaries. The Foundation was created to help investigate this and similar crimes and to fight impunity.

Our research demonstrated that it is not Russia-specific situation, but a worldwide problem. Journalists are being jailed and shot at, stories censored, including self-censored and publications closed, harassment lawsuits, a lack of funding, training, and institutional support.

Based on this understanding we formulated our mission and activities deriving from it:

1. Make funding available to help to investigate violent crimes against journalists – under a strict condition of abiding by ACOS principles of safety, of which we are a signatory along with many other individuals and organisations. We believe proper investigations of those crimes will help prevent next crimes from happening and send a signal we will be fighting against impunity alongside with our distinguished colleagues.

2. Raising awareness and facilitating the access to existing resources, helping to adapt them to the local specifics. JFJ hopes to contribute to the international campaign to convince both news organisations and independent journalists, freelancers and citizen journalists about the importance of safety. Journalists must work together and with organisations like RSF and Freelance Register and others to protect themselves and to exchange information about existing resources.

3. Risk prevention is in the core of our activities. We want to equip the media workers with knowledge and skills that more likely than not may prove to be life saving, as one never know when their normal work place suddenly becomes a dangerous and hostile environment.

JFJ will be funding tailor-made safety trainings, including those for non-English speakers. We are already developing those for our pilot region, the post-Soviet countries, in the following areas:

There is a popular saying in Russian:

We now need to join efforts to help this drowning media worker in the increasingly hostile environment: make them aware they are not fighting it alone and equip them with tools, skills and knowledge that will help maximise the chance of their survival and completing the job of keeping the freedom of speech afloat.