Editor’s Note: This timeline is a part of a special project by the Justice for Journalists Foundation and the Kyiv Post – “Dying for Truth,” a comprehensive online database of stories about the journalists murdered in Ukraine’s 28 years of independence. In Ukraine, telling the truth can be a dangerous thing. Since 1991, when the country gained independence from the Soviet Union, more than 50 journalists have been killed across Ukraine. Police and international media watchdogs have confirmed that the murders were connected to the journalists’ work in only 13 of those cases. Most of the crimes have been poorly investigated and the killers remain unpunished.

Oct. 31 and Nov.14, 1999 –  Leonid Kuchma wins the presidential election in Ukraine for a second term.   Journalist Olexiy Podolsky, who had covered on the election, claims the vote was rigged in favor of Kuchma. He came fifth, after lawmaker Nataliya Vitrenko, but the Central Election Commission falsified the results, Podolsky says. The Central Election Commission claims the election was fair. At the time, Georgiy Gongadze had been working as Vitrenko’s press secretary. However, he simultaneously kept working as a prominent political journalist, criticizing Kuchma’s regime.

December 1999 – Olena Prytula, who used to work as a Reuters stringer, together with Georgi Gongadze and journalist Sergiy Sholokh comes to Washington D.C. with a letter signed by 60 journalists to draw U.S. attention to the numerous freedom of speech violations in Kuchma’s Ukraine.

Feb.9, 2000 – Oleksandr Yelyashkevych, a Hromada Party lawmaker in the Verkhovna Rada who was the head of the Temporary Investigative Commission that monitored the local and central authorities and Central Election Commission during the 1999 presidential election, is severely beaten near the Moscow Hotel in Kyiv.  His attacker, Vitaly Vorobey, later explains that he simply mistook the lawmaker for another man. Vorobey is sentenced to 5 years in prison in 2002.  Yelyashkevych receives political asylum in the United States in 2000.

April 16, 2000 – Kuchma initiates a referendum in order to change the constitution of the country. He wants to have more control over the parliament, lift lawmakers’ immunity from prosecution and limit the number of lawmakers from 450 to 300. He also wants to know if Ukrainians supported the idea of a two-chamber parliament. Ukrainians support all four of the president’s ideas. The Constitutional Court supports the referendum results. However, the Rada refuses to obey, claiming that Kuchma wants to usurp power. 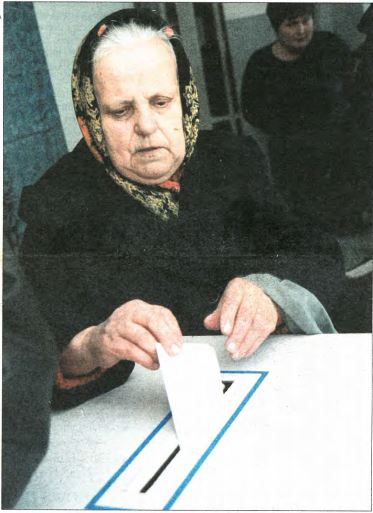 A woman casts her ballot after she voted on Ukraine’s presidential election in Kyiv on Oct.31, 1999. (Victor Suvorov)

June-July 2000 – Podolsky tells Gongadze that interior ministry officers kidnapped him and beat him in a forest outside Kyiv.

July 14, 2000 – Gongazde sends a letter to Ukrainian Prosecutor General Mykhailo Potebenko claiming that some law enforcement officers have been tracking his movements and gathering information about him and his colleagues. He also shares copies of this letter with journalists covering the Ukrainian parliament. 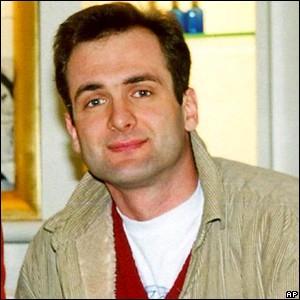 Georgiy Gongadze poses for a portrait.

Sept.16 2000 – Gongadze gets into what he thinks is a regular taxi. But Pukach is sitting in the front passenger seat and one of his subordinates is driving. Later investigators will determine that Pukach and his men passed their car off as a taxi to kidnap the journalist.

Sept. 17, 2000 – Interior Ministry officers kill Gongadze in an area near Sukholesy village in Kyiv Oblast. They set the body on fire and then bury it to cover their tracks. The same day the police open a criminal investigation into Gongadze’s disappearance.

October 2000 – Pukach relocates the body of Gongadze and buries the body and the head in different places.

Nov. 2, 2000 – The beheaded body of Gongadze is found in Tarashchansky forest, 100 kilometers away from Kyiv.

Nov. 28, 2000 – Opposition leader and Socialist Party head Oleksandr Moroz, considered Kuchma’s main rival in the 1999 presidential election, publishes wiretapping recordings made by the president’s guard officer, MajorMykola Melnychenko. The tapes feature a voice resembling Kuchma’s and the voices of then Presidential Administration Head Volodymyr Lytvyn and Interior Minister Yuriy Kravchenko. In the recordings, Kuchma talks about Gongadze and says that somebody needs to deal with the journalist. This part of the wiretapping features no direct order to kill the journalist.

Moroz’s aide, Yuriy Lutsenko, gets the tapes from Melnychenko and together with Moroz plays the tapes during a press conference in the Rada. “Ukraine Without Kuchma” protesters get ready to protest near the German embassy in Kyiv on Jan.15, 2000. They demanded that the German government cancel President Leonid Kuchma’s upcoming visit to Germany.

December 2000 – March 2001 – “Ukraine without Kuchma” protests erupt in the country, fueled by the publication of Melnychenko’s tapes. Ukrainian human rights activist and political scientist Volodymyr Chemeris and Socialist Party member Yuriy Lutsenko lead the protests. The protests end with mass arrests of the protesters. Kuchma, under the pressure from protesters, fires Yuriy Kravchenko from his post.

June 21, 2001 – Using the Melnychenko tapes as evidence, lawmaker Yelyashkevych claims Kuchma ordered an attack on him too. In his letter to the Parliamentary Election of the Council of Europe, Yelyashkevych writes that his commission identified numerous violations by Kuchma himself during the 1999 election campaign. He also describes the 2000 referendum as unconstitutional. On Feb. 9, Yelyashkevych proposes organizing a parliamentary commission in order to question the referendum’s legal status and initiate Kuchma’s impeachment. He is severely beaten the same day. The investigation into his beating will be stalled for many years. The government misinformed Ukrainians about the motives of his attacker, Yelyashkevych says.

Oct. 21, 2003 –  Pukach resigns from the post of the head of the surveillance at the Interior Ministry.

Oct. 22, 2003 –   Pukach, who had come to Kyiv to collect a pension, is detained by the Prosecutor General’s Office of Ukraine. A day after, a court sanctions his arrest. He issuspected of destroying documents that proved surveillance against Gongadze in May-July 2000, a fact police had repeatedly denied at the time.

Nov. 5, 2003 – The Appeals Court of Kyiv grants the request of Pukach’s lawyers and changes the restriction on him from arrest to travel ban. Pukach is released. Soon after his release, he disappears for six years. Investigators put him on the wanted list. They say Pukach is hiding from justice.

April 2004 – A criminal case against Pukach for “destroying documents related to Gongadze’s case” is closed by the Court of Appeals.

March 2005 – Former Interior Minister Yuriy Kravchenko dies. The ex-law enforcement official reportedly shoots himself twice, a day before he is supposed to be questioned by the Prosecutor General’s Office of Ukraine. In his suicide note, he reportedly writes: “I am a victim of circumstances, blame Kuchma and the people around him.” Podolsky believes that the suicide was staged. The same month, President Viktor Yushchenko — newly elected after the Orange Revolution, a peaceful mass protest also led by Yuriy Lutsenko — announces Gongadze’s murder has been solved.

November 2005 — European Court of Human Rights orders Ukraine to pay 100,000 euros to Gongadze’s wife, Myroslava, as compensation for moral and material losses due to the country’s inability to properly investigate his murder.

March 2008 – All three Interior Ministry officers, Puckach’s subordinates, receive prison sentences. Valeriy Kostenko and Oleksandr Popovych get 12 years behind bars. Mykola Protasov is sentenced to 13 years in prison. All of them serve their sentences in Menska Prison for former law enforcement officers convicted of crimes in Chernihiv Oblast. 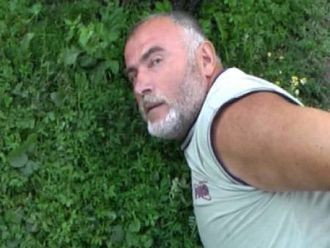 Ex-General of the Interior Ministry of Ukraine Oleksiy Pukach is pictured during his arrest in Molochki Village in Zhytomyr Oblast in 2009. (Courtesy)

July 21, 2009 – The Security Service of Ukraine (SBU), led by then-Deputy Chief Vasyl Hrytsak, who will lead the SBU during President Petro Poroshenko’s rule, arrests Pukach, who had been living in the Zhytomyr Oblast village of Molochki for a year with his mistress and her son. Pukach shows the investigators the place where he allegedly buried the Gongadze’s head.

July 22, 2009– Hrytsak says Pukach agreed to cooperate with the investigation and name the people who ordered him to kill Gongadze.  Mykola Melnychenko claims Pukach might give valuable testimony against Leonid Kuchma and Volodymyr Lytvyn. Pukach is behind bars at the SBU pre-trial detention center, guarded by SBU Alfa special forces 24/7.

July 24, 2009 – Pukach has been arrested for two months in pre-trial detention center. Prosecutors suspect Pukach in Gongadze’s murder, the destruction of key documents and kidnapping and beating journalist Oleksiy Podolsky.

Dec.6, 2010 – Investigators reveal that Interior Minister Yuriy Kravchenko ordered Pukach to kill Gongadze. And after five months of surveilling the journalist, he, together with Popovych, Protasov and Kostenko, kidnapped Gongadze, beat him and choked him to death. Pukach also forced his three subordinates, who claimed they were not aware of his plan to kill Gongadze, to keep quiet about the murder. The Interior Ministry closes the Gongadze case due to Kravchenko’s suicide.

March 21, 2011 – The Prosecutor General’s Office opens criminal proceedings against former President Leonid Kuchma. He is accused of abusing his power. Investigators say Kuchma ordered his subordinates to “deal with Gongadze,” but it was Kravchenko’s initiative to kill him. Kuchma is placed under a travel ban.

Dec. 4, 2011 – The Pechersk District Court of Kyiv closes the case against Kuchma. The judge states that Menychenko’s tapes, the only evidence of Kuchma’s wrongdoing, are not admissible in court because Melnychenko had no authority to record the president.

Jan. 29, 2013 – The Pechersk District Court sentences Oleksiy Pukach to life in prison. He is found guilty of abuse of power and collusion to commit murder. The court orders that his property be confiscated and that he pay Hr500,000 to Myroslava Gongadze and Hr 100,000 to Podolsky as a compensation for moral harm. He is also stripped of the rank of general. The court rules that Kravchenko gave an order to Pukach to beat and scare Podolsky, who took part in opposition protests in Kyiv, and kill Gongadze. When the judge asks Pukach if he agrees with the sentence, he says: “If you want to know the motives, ask Kuchma and Lytvyn!”

Feb. 17, 2015 – Prosecutor General Viktor Shokin forms a group of prosecutors and re-opens the pre-trial investigation into the organization of Gongadze’s murder, aiming to find out who ordered the interior ministry officers to kill Gongadze.

April 4, 2015 – Mykola Protasov, one of the Interior Ministry officials involved in the killing, unexpectedly dies in Menska Prison. His lawyer, Viktor Chevguz, says Protasov died due to illnesses.

June 4, 2015 – Telychenko withdraws her claim. She says that she wanted the court to reclassify the case as a contract murder. But then she discovered that the appeals court might release Pukach, who received a fair sentence, she says. Podolsky continues suing, claiming that the closed court process was conducted with numerous violations and that the man who ordered his beating and Gongadze’s killing, Leonid Kuchma, still remains free.

August 2015 – The Prosecutor General’s Office re-opens the case against Major Mykola Melnychenko.  He is a suspect in revealing state secrets, state treason and cooperating with foreign intelligence services, including the Russian Federal Security Service (FSB). Melnychenko denies wrongdoing and calls the new accusations political persecution in an interview with censor.net website. Ukrainian Orthodox Church bishops read the funeral service for Georgiy Gongadze, the Ukrainska Pravda journalist near the Mykola Naberezhny Church in Kyiv in March 2016, 16 years after he was brutally murdered by the law enforcement officers. The investigators haven’t managed to find who ordered his murder by this day. (Volodymyr Petrov)

June 2016 – Pukach is transferred to Chortkivska Prison in Ternopil Oblast.

October 2017– Pukach files a cassation claim to the Supreme Court of Ukraine. He asks it to change his life sentence to 15 years in prison.  Because of this claim, his sentence can’t be implemented. Pukach is transferred to Lukianivske pre-trial detention center in Kyiv.

Jan. 10, 2018 – The court grants the request of Pukach’s lawyers and recalculates his sentence according to the so-called “Savchenko Law.” In 2016, then-lawmaker Nadiya Savchenko authored the law which counts one day in pre-trial detention as two days in prison. This doubles the time Pukach spent behind bars. Pukach was held in a pre-trial detention center from 2009 till 2016.  As of 2019, he has served 16 years in prison under the “Savchenko Law.”

September 2019 – The next cassation court session in Pukach’s case is planned for Sept. 4, 2019. If the court satisfies Pukach’s request for a lighter sentence, he might be released right there in the courtroom.