Sheremet assassination is clear message to journalists – Justice for Journalists

Editor’s Note: This story is part of a special project by the Kyiv Post, “Dying for Truth,” a series of stories documenting violence against journalists in Ukraine. Since the country gained independence from the Soviet Union in 1991, more than 50 journalists have been killed across Ukraine. Most of the crimes have been poorly investigated, and the killers remain unpunished. The project is supported by the Justice for Journalists Foundation. Content is independent of donor.

Sevgil Musayeva, chief editor of the Ukrainska Pravda news website, still remembers July 20, 2016 as if it were yesterday. The day began with a call from Olena Prytula, the founding editor of Ukrainska Pravda, who asked her to come into work from vacation.

“She said her car exploded and that Pasha was in the car. And that Pasha died,” Musayeva told the Kyiv Post on Oct. 21.

Ukrainian-Belarussian journalist Pavel Sheremet, 45, left his home in the center of Kyiv early in the morning on July 20, 2016. He was driving the car of his partner, Prytula, to get to a morning radio show he hosted on Radio Vesti when the car exploded in the middle of a busy intersection in the city center.

Sheremet combined his work as a radio host with duties as the executive director of Ukrainska Pravda.

He was organizing the news site’s journalism school, teaching students how to conduct interviews, host the shows and write about Ukrainian politics.

“He was a great motivator for the whole team. He was always in a good mood, even on the darkest days,” Ukrainska Pravda journalist Roman Romaniuk told the Kyiv Post. “When he was murdered, our newsroom plunged into an atmosphere of grief.”

Sheremet’s murder was an attack on Ukrainska Pravda itself, Musayeva said. For the second time after the murder of Georgiy Gongadze in 2000, a Ukrainska Pravda journalist was brutally killed.

In 2000, the beheaded body of Gongadze, a prominent critic of authoritarian President Leonid Kuchma’s regime, was found in a forest near Kyiv. His killers were only sentenced eight and 13 years after his death, and police still haven’t identified who ordered the murder.

And for Sheremet, investigators have so far failed to even find the perpetrators.

“Three years have passed and we still have no answers about who did this to Pavel and why,” Musayeva said.

The newsroom of one of the best independent media outlets in Ukraine still hasn’t fully recovered.

“I was on the verge of the nervous breakdown. Olena fell out of work for a year. My journalists were afraid for their safety,” Musayeva said.

A call for answers

Although the National Police led an active investigation at the crime scene, searching for evidence and questioning witnesses, in time public interest in Sheremet’s case waned and the energy behind the investigation seemed to disappear.

“We understand that society demands results and names of those who ordered and those who conducted the murder, but as of this day, we think it is not yet possible to identify those people,” Serhiy Knyazev, then-chief of the National Police, said during a July 2019 briefing three years after Sheremet’s murder. “This crime is not yet solved.”

President Zelensky had summoned law enforcement to his office three days after the third anniversary of Sheremet’s murder. Previously journalists had demanded the leaders of the National Police and the Prosecutor General’s Office resign due to their inability to solve the crime.

Zelensky had promised that law enforcement would publicly disclose their findings in Sheremet’s case, but their reports were never released. Instead, journalists were left to take Zelensky’s word that the investigations were on track after he spoke with Knyazev and Interior Minister Arsen Avakov behind closed doors.

“I saw a lot of materials. I want to tell you that, from what I’ve seen, I can say that we’re going to have the result. I can’t tell you how long it will take, but the people who did this will be found,” Zelensky said on July 23.

Ruslan Riaboshapka, who was appointed Prosecutor General of Ukraine in late August, also said that solving Sheremet’s murder would be a priority for the law enforcement in Ukraine.

“It is important for us to show that journalists must not be killed in Ukraine and that the state will find the killers, even in three or five years after the murder,” Riaboshapka said in an interview with the RBC-Ukraine news site on Sept. 9. 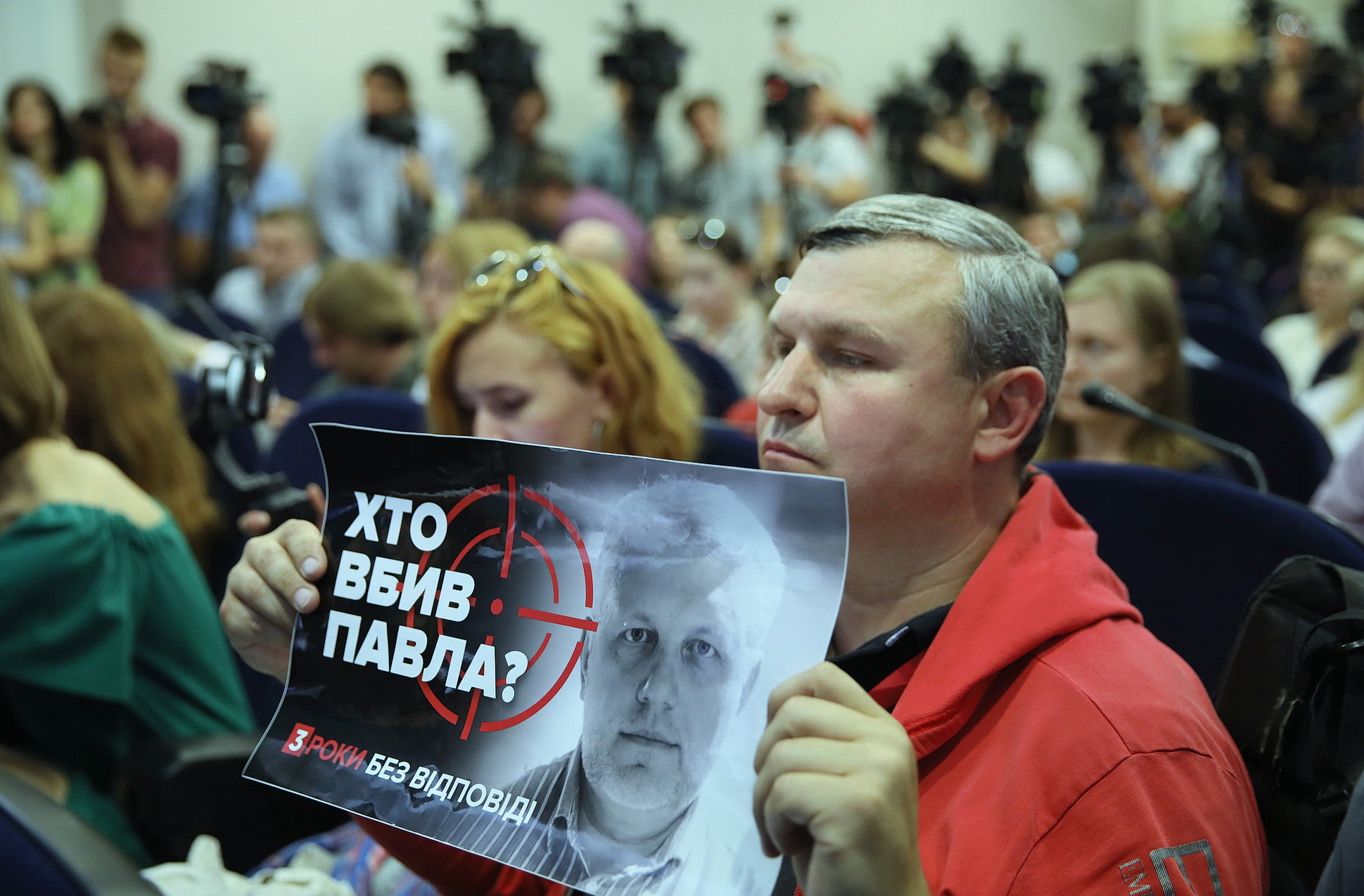 A journalist holds a sign with the photo of Ukrainian-Belarussian journalist Pavel Sheremet, which reads “Who killed Pavel?” during the press conference in Kyiv on July 23, 2019. That day Ukraine’s President Volodymyr Zelensky listened to the report of Serhiy Knyazev, then-chief of the National Police of Ukraine on Sheremet’s murder investigation progress. (Volodymyr Petrov)

The explosive device went off under the front seat of Prytula’s red Subaru and immediately set the car on fire. Musayeva was at the crime scene 15 minutes after Prytula called her. By the time, Sheremet was dead.

Musayeva immediately started working — taking pictures of the scene and questioning witnesses. Even now, she remembers the smallest details from the scene: the firefighting foam on the car, the bloodstains on the ground.

She sent a message to the Ukrainska Pravda group chat: “Guys, today is going to be rough. Olena’s car exploded, Pasha died.”

Journalists of Ukrainska Pravda were the first ones to report the murder of their colleague. Throughout the rest of the day, Musayeva received more than 300 calls from friends, journalists and lawmakers trying to find out if the news about Sheremet’s murder was true and voicing their support.

“I only started crying after (lawmaker Iryna) Gerashchenko’s call. She said she thought a lightning never strikes the same place twice,” Musayeva said.

The brutal murder of the famous journalist shocked the country, and Ukraine’s top officials promised to find Sheremet’s killers fast.

Khatia Dekanoidze, then-chief of the National Police of Ukraine, arrived at the crime scene 30 minutes after the murder. He said that, from that day, it would become a point of honor to solve the murder.

The police labeled the crime as a murder committed in a way that posed a threat to multiple people. The punishment for it is 7 to 15 years in prison.

International media watchdogs and foreign governments called on Ukraine to solve the crime, even providing aid for the investigation. Soon, police announced they had two unnamed suspects — a man and a woman who are seen on surveillance video attaching the explosive device to the bottom of Sheremet’s car. But they said the two suspects’ identities could not be established.

Musayeva says the National Police worked hard during the first months after the crime. Prytula observed the police officers inspecting the area next to her house closely.

“I had to go in for questioning two or three times a day for the first couple of months. Dekanoidze, Knyazev questioned me personally,” Musayeva said.

However, a year after the murder, the investigation stalled. In May 2017, investigative journalists from Slidstvo.Info and the Organized Crime and Corruption Reporting Project released the documentary “Killing Pavel,” where they proved that the National Police investigated the murder with negligence.

In the movie, journalists showed how the killers, a woman and a man, met, placed the explosive device under Sheremet’s car and then returned to the crime scene to detonate the explosive the next morning.

The journalists found that the official investigation hadn’t identified or questioned at least two important witnesses — a taxi driver and a man who stayed close to the crime scene and was later identified as a former officer in the Security Service of Ukraine (SBU).

Only after the documentary was released did investigators question the former officer, but said he had nothing to do with the murder.

In September 2017, Musayeva learned that police had made Sheremet’s case materials classified.

But journalists, disappointed with the National Police’s apparent lack of effort, kept pushing.

On Feb. 28, 2018, Prytula sent a letter to the Prosecutor General’s Office of Ukraine, demanding they reclassify the case from a murder to a terror attack. Had it be reclassified, the case would be passed from the National Police to the SBU.

“The terrorists’ goal was to scare journalists. Pavel was a journalist famous in Ukraine, Belarus and Russia. He was stripped of his Belarusian citizenship because of the sharp criticism of the Belarusian government,” Prytula said in the letter.

The General Prosecutor’s Office refused to satisfy her claim.

“Which is strange, because from the videos you can see that the blast was strong and it could have hurt other people on the street. But we got a response that it was impossible to reclassify the case,” Musayeva said.

During the meeting with Zelensky on July 23, Knyazev said that the investigators know that the attackers used a homemade explosive device that used the elements of a MON‑50 anti-personnel mine, and attached it to the bottom of the car with magnets.

According to him, law enforcement studied materials from more than 200 surveillance cameras located in the area to understand the movements of the attackers the night when they installed the bomb, and on the day of the murder, when they detonated it remotely, standing close to the car. The National Police have searched for the man and a woman in the Europol and Interpol bases and requested the phone records from all mobile phones that were in the area from Ukrainian mobile operators.

The National Police has identified several potential motives for the crime and believes Sheremet’s professional activity in Ukraine and abroad could have been one of the motives for his murder. Another possible motive was to destabilize the political situation in Ukraine. In 2016–2017, at least five prominent people, including officials and veterans, were killed with car bombs, similarly to Sheremet.

The police have also considered that the killers might have had another target — Prytula, Sheremet’s partner and the owner of the car. Musayeva says that it is unlikely: Sheremet always used the car in the mornings to go to his radio job.

In December 2015, Prytula and Sheremet noticed that they were being followed by an unknown car. They reported it to the police, but nothing followed.

Investigating the murder, the National Police approached nine countries for help studying the details of Sheremet’s financial operations, his movements and his ties with Belarus and Russia, where he used to live.

Still, the police have not identified a clear motive for the crime. Musayeva and other Ukrainska Pravda journalists are also confused. Unlike Gongadze, who was investigating high-profile corruption and sharply criticizing the government, Sheremet was not working on any stories that could make him a target for an attack.

“He wouldn’t just mess with someone,” Musayeva said. “His criticism was ethical and always to the point. And to murder him in this horrible way… For me, it is a crucial act of injustice.”