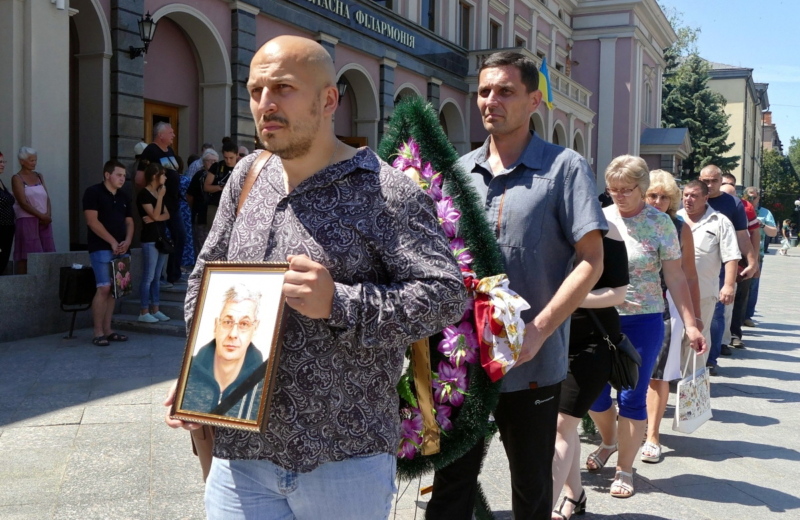 Cherkasy journalist who pursued truth is murdered for exposing corruption

Editor’s Note: This story is part of a special project by the Kyiv Post, “Dying for Truth,” a series of stories documenting violence against journalists in Ukraine. Since the country gained independence from the Soviet Union in 1991, more than 50 journalists have been killed across Ukraine. Most of the crimes have been poorly investigated, and the killers remain unpunished. The project is supported by the Justice for Journalists Foundation. Content is independent of the donor.

CHERKASY, Ukraine — Vadym Komarov, a journalist from Cherkasy, was a walking news warehouse for his native city of some 277,000 people in central Ukraine.

Besides working for local media, Komarov was a popular blogger, writing about corruption in the city council, schools, prisons and much more. His colleagues and friends describe him as an uncompromising and aggressive reporter, a truth-seeker ready to get to the bottom of every story.

He is also the latest journalist murdered in Ukraine for his work.

Komarov left home early in the morning on May 4. His beloved cat was actively protesting him leaving, but he had to do some grocery shopping and later to visit a source in the local branch of the Interior Ministry. The next day, he and his wife were planning to go on vacation to Egypt.

The meeting with his source never happened. At 9:30 a. m., as Komarov was near Cherkasy’s central market, an unknown man struck him in the head from behind with a blunt instrument.

Doctors induced a coma to save Komarov’s life, but the journalist never recovered. He died on June 20. He was 57-years-old.

The same day, the National Police of Ukraine published a composite sketch of a suspect — a tall man with a shaved head, wearing all black.

Then the head of the National Police of Ukraine, Serhiy Knyazev, announced that a joint group of local and Kyiv officers had started investigating the attack and reclassified it as a murder.

“The National Police will do its best to solve the murder,” Knyazev said.

However, six months later, the police still have no suspects.

“The investigation is still ongoing. However, as of this day, no notices of suspicion have been announced,” Dmytro Gryshchenko, head of the communications department at the Cherkasy National Police, told the Kyiv Post on Nov. 5.

A man of conflict

Komarov started working in journalism during the Soviet era. In the ensuing years, he wrote for many local media. In 2017, he started writing for Dzvin Ukraine, where he published his blog. He was also planning to revive the early 20-century newspaper Cherkaskiye Otkliki (Cherkasy Comments) with Vladyslav Borysiuk, Dzvin Ukraine’s founder and chief editor.

“What I liked in him as a journalist was his bite. If he took a topic, he would get to the bottom of it. He was like a track hound when it came to digging and reporting,” Borysiuk told the Kyiv Post on Nov. 1.

“However, he had a lack of tact. I’m not saying reporters should hold back some information, but one shouldn’t offend people with the style of the material. And Vadym was frequently too harsh with certain people in his stories,” he added.

Denys Kolesnyk, a fellow blogger who frequently collaborated with Komarov on Facebook and YouTube, confirmed Borysiuk’s words, saying that while Komarov was a very kind friend and loving husband, at work he was fearless and daring. Unlike most other local journalists and media, Komarov was not afraid to name people in his stories. And not everybody in the city took it well.

“Even before the May 4 attack, he received a lot of threats and survived several assassination attempts,” Kolesnyk said.

Vitaly Chernukha, chief architect of the Cherkasy city council and Komarov’s old friend, said an unknown man had tried to shoot Komarov at his country house in 2016.

“Somebody rang the door, Vadym went to open it. He stuck his head out of the door and saw a man pointing a gun at him. He managed to hide and the bullet hit the wall where his head was a moment earlier,” Chernukha recalled.

Komarov called the police and described the shooter in detail, but the police never found him.

“Later Vadym told me that, according to his sources, a man was found in a nearby village stabbed with a pitchfork,” and Komarov believed he was the shooter, Chernukha said.

Another attack happened in 2017. An unknown man attacked Komarov in the hall of a residential building, wounding him in the leg. “The police even gave Vadym a bulletproof vest that time,” Chernukha said.

When asked why he thinks the attackers targeted Komarov, Chernukha said it was because Komarov was not afraid to tell the truth. “He rarely could go in for a compromise. When he saw a problem, he reported it.”

While police have not identified possible motives in Komarov’s murder, his friends and colleagues have two main theories: either Komarov was attacked due to a long-term conflict with a local branch of the nationalist party Svoboda or because of his recent investigation into violations and corruption at the local Prison No. 62.

Komarov’s interest in the prison began in April, when several prisoners got drunk during Orthodox Easter and started a riot, attacking prison guards.

After the attack, on May 2, the administration of the prison imposed a special security regime and forbade family visitation for more than 10 days.

Komarov published his last story, which detailed human rights abuses and corruption inside the prison on May 3, the day before the attack. On May 7, all 630 prisoners went on a hunger strike, protesting the conditions.

In the story, Komarov detailed beatings and poor access to healthcare in the prison. He also accused Oleksandr Yushchenko, a deputy head of the prison, and Mykola Babitchev, the top prison crime boss, of selling drugs and alcohol to inmates.

Another deputy head of the prison, Serhiy Gorbenko, denied Komarov’s accusations in an interview with Suspilne Cherkasy television on May 7.

Gorbenko said he would investigate where the prisoners were getting alcohol and stated that there were no human rights violations in the prison.

“I had a fight with him over this story. Too many assumptions. And criminals usually have no sense of humor. I don’t know if I am right, but I told the same thing to the police. The criminal, violent style of the attack, the timing — it all fits,” Borysiuk said.

Plus, without support from the outside, the prison scheme Komarov reported would not have worked, the chief editor said. Komarov promised to publish more compromising material about the prison on Facebook, Kolesnyk added.

On May 3, Komarov published not only his last story about the prison, but also a Facebook post stating that Yuriy Botnar, the deputy mayor of Cherkasy and a Svoboda party member responsible for developing sports in the city, lied when he said that sports education flourished during his time in office.

“And soon I will publish the info why,” Komarov wrote.

The journalist’s conflict with Botnar had a long history. Since 2014, Botnar’s department had financed the construction of a new sports school for children in a renovated movie theater. According to local media, the construction cost some Hr 15 million (roughly $610,000). However, when the local council opened the school in 2018, they had no safety inspection documents. A year later, the school was still not operational.

Komarov actively criticized Botnar. And, on the day of the attack, Komarov was reportedly heading to the interior ministry to get more compromising material on Botnar.

In the summer of 2019, Cherkasy media reported that police suspected Botnar’s father, Andriy Botnar, in the attack on Komarov. But the younger Botnar denied that information in an interview with the Kyiv Post on Nov. 1, although he acknowledged that police had questioned him and his father about Komarov’s murder.

He called the sports school scandal an overblown story. He blamed bureaucracy and said that, a year after the official opening of the school, he had all the documents that prove the building is perfectly safe for children.

“I don’t consider Komarov a journalist. He was not even a blogger, just an active user of Facebook, spreading unproven rumors for money. He wanted to discredit me and the Svoboda party in general,” Botnar said. “But I never wished any harm to him because I never took him seriously.”

Botnar said that he and other Svoboda party members in Cherkasy want Komarov’s murder to be solved as soon as possible, as the murder has been used to hurt the Svoboda party’s image in the city.

Architect Chernukha denied Botnar’s claim that Komarov was spreading rumors. He said that when Komarov lacked confirmation of certain information he always noted, “rumor has it.”

“But if he published a story, he always had documents that proved it was the truth,” Chernukha said.

Many people in Cherkasy miss Komarov, his friend added. “His wife tries to distance herself from this. It’s extremely hard for her. Even his cat still behaves as if it sees Vadym’s spirit in the house.”

Komarov’s widow Olga Shevchenko couldn’t meet with the Kyiv Post as she has been babysitting her granddaughter, born only a few weeks after Komarov died.