Editor’s Note: This story is part of a special project by the Kyiv Post, “Dying for Truth,” a series of stories documenting violence against journalists in Ukraine. Since the country gained independence from the Soviet Union in 1991, more than 50 journalists have been killed across Ukraine — including eight since 2014. Most of the crimes have been poorly investigated, and the killers remain unpunished. The project is supported by the Justice for Journalists Foundation. Content is independent of the donor. All the stories in the series can be found here.

Before the 100-day EuroMaidan Revolution of 2013–2014, Ukrainian journalists had two options — either work for pro-government media or cover government corruption. The second option paid worse and could end with lawsuits, physical threats or worse.

For three months, journalists covered every moment of the people’s uprising and the brutal use of force by Berkut riot police that killed more than 100 demonstrators.

Journalists then rushed to cover Russia’s military invasion and annexation of Crimea, uprisings in eastern Ukraine and finally Russia’s war that is now in its sixth year, claiming nearly 14,000 lives and leaving the Kremlin in control of 7 percent of Ukrainian territory.

Newsrooms in Ukraine worked practically nonstop during those transformational times. Many paid a price; some the ultimate price.

Eight journalists have been killed since 2014, the U.S.-based Committee to Protect Journalists reported, while dozens have been wounded.

According to the National Union of Journalists of Ukraine, more than 270 journalists were physically attacked during the three months of the EuroMaidan Revolution.

After Russia launched its war in the eastern Donbas, following the seizure of Crimea, conditions became deadly.

Another 300 journalists have faced political repression and pressure from the Russian government in Crimea since 2014, Iryna Sedova of the Crimean human rights protection group NGO told Radio Liberty on Nov. 4.

Additionally, since 2014 more than 80 journalists have been imprisoned by Russian-backed mercenaries in the Donbas, according to the Kyiv-based Institute for Mass Information,
Most of these crimes remain poorly investigated.

The government needs to create special units to investigate crimes against journalists, Anatoliy Maksymchuk, the first deputy minister of culture of Ukraine said during a discussion with Ukrinform news agency on Nov. 15.

Solving crimes against journalists is far from the priority for the National Police, he added. “Therefore, the investigations of those crimes are being pushed into the background or even stay out of the investigators’ attention.”

Nayyem called on Ukrainians to come to Maidan Nezalezhnosti Square in Kyiv to protest against the decision by the Cabinet of Ministers to postpone the European Union-Ukraine trade and political association agreement. The peaceful protest escalated on Nov. 30, when squads of Berkut riot police beat protesters, trying to squeeze them out of the central square.
That night, hundreds of media outlets reported on the unexpected police debacle, drawing international attention to Ukraine.

When even more people came to protest on the Maidan the next day, Ukrainian and international journalists rushed to Kyiv to report about the revolution. Unfortunately, reporting from the EuroMaidan was sometimes as dangerous as protesting on the streets. Riot police were indiscriminate in attacks.

More than 40 journalists were beaten on EuroMaidan on Dec. 1, 2014 by riot police cracking down on the protesters. “Nobody wants to be filmed at the moment he commits a crime,” Efrem Lukatsky, the Associated Press news agency photographer told the Kyiv Post.

Lukatsky was among the journalists who reported from the start of the revolution until the bloodiest days of late February 2014.

“I don’t think Berkut got a command to attack journalists. They were just emotional. If some Berkut officers didn’t like us filming them, they started shooting at us with rubber bullets. They were trying to hit our heads and private parts,” Lukatsky said.

Lukatsky thinks that the officers of the now-disbanded police squad attacked journalists because they didn’t want their use of force caught on camera.

“I think deep in soul many of them realized they were doing wrong, that is why they didn’t want anybody to see them shooting,” the photographer said.

The level of aggression at EuroMaidan grew daily, and soon after the firsts attacks, protesters started forming self-defense squads armed with sticks, bricks and Molotov cocktails. Squads of pro-government thugs powered the Berkut.

Cameras were fixed on every fight during EuroMaidan in Kyiv and other Ukrainian cities.

“Every Berkut officer could have a different reaction. As we were hunting them, filming constantly,” Lukatsky said. “Indeed, it was like a hunt.”

Viacheslav Veremiy, a journalist for the pro-Russian newspaper Vesti, was killed after trying to take a picture of armed pro-government thugs on the night of Feb. 19, 2014, and they responded by attacking the car carrying Veremiy and his colleague. The driver and another colleague managed to escape, but Veremiy was severely beaten and fatally shot in the back.

The pictures, videos and stories from EuroMaidan helped the world see Ukraine in a new light as citizens fought for a democratic future free from Russia’s dictatorship.

Furthermore, journalistic materials were used as evidence in the investigations into the EuroMaidan killings. Unfortunately, investigations have made little progress in five years and there are fears that they will be stopped. Prosecutor General Ruslan Riaboshapka, however, told the Kyiv Post in an interview this month that solving the killings is one of his team’s highest priorities.

Two days after Yanukovych fled to Russia on Feb. 22, 2014, Russia started the military occupation of Crimea.

Russian President Vladimir Putin initially denied that Russian soldiers were taking part in the blockade of Crimea, only to admit it later. The Kremlin staged a rigged referendum and formally annexed the peninsula on March 18, 2014.

The Russian-backed government soon started to silence the independent press. More than 10 newsrooms have left Crimea and moved to Kyiv since 2014, Volodymyr Prytula, the chief editor of the Krym Realii TV project from Radio Free Europe/ Radio Liberty, told the Kyiv Post.

Krym Realii was created in March 2014 to cover the conflict but was soon forced to move out of Crimea, but continues to work with Crimeans who provide information, often anonymously, but at great risk.

“More than 60 journalists who worked with us faced the pressure from the Russian security services in Crimea since 2014. More than 20 of them were forced to stop cooperation. Some of them left the profession,” Prytula said.

Many journalists of Krym Realii were forced to leave Crimea in 2016 after the Russian Federal Security Service arrested Radio Liberty journalist Mykola Semena. In October 2017, a Russian-backed court sentenced Semena to a 2.5 year suspended sentence on charges of violating the territorial integrity of the Russian Federation. Semena was also forbidden to lead any kind of public activity.

Another Krym Realii journalist, Anna Andrievska, faces the same charges and could face jail time if she returns to Crimea.

Before the annexation, Andrievska worked for local media including the Russian-owned newspaper Argumenty Nedeli, which faced censorship after the Russian annexation. 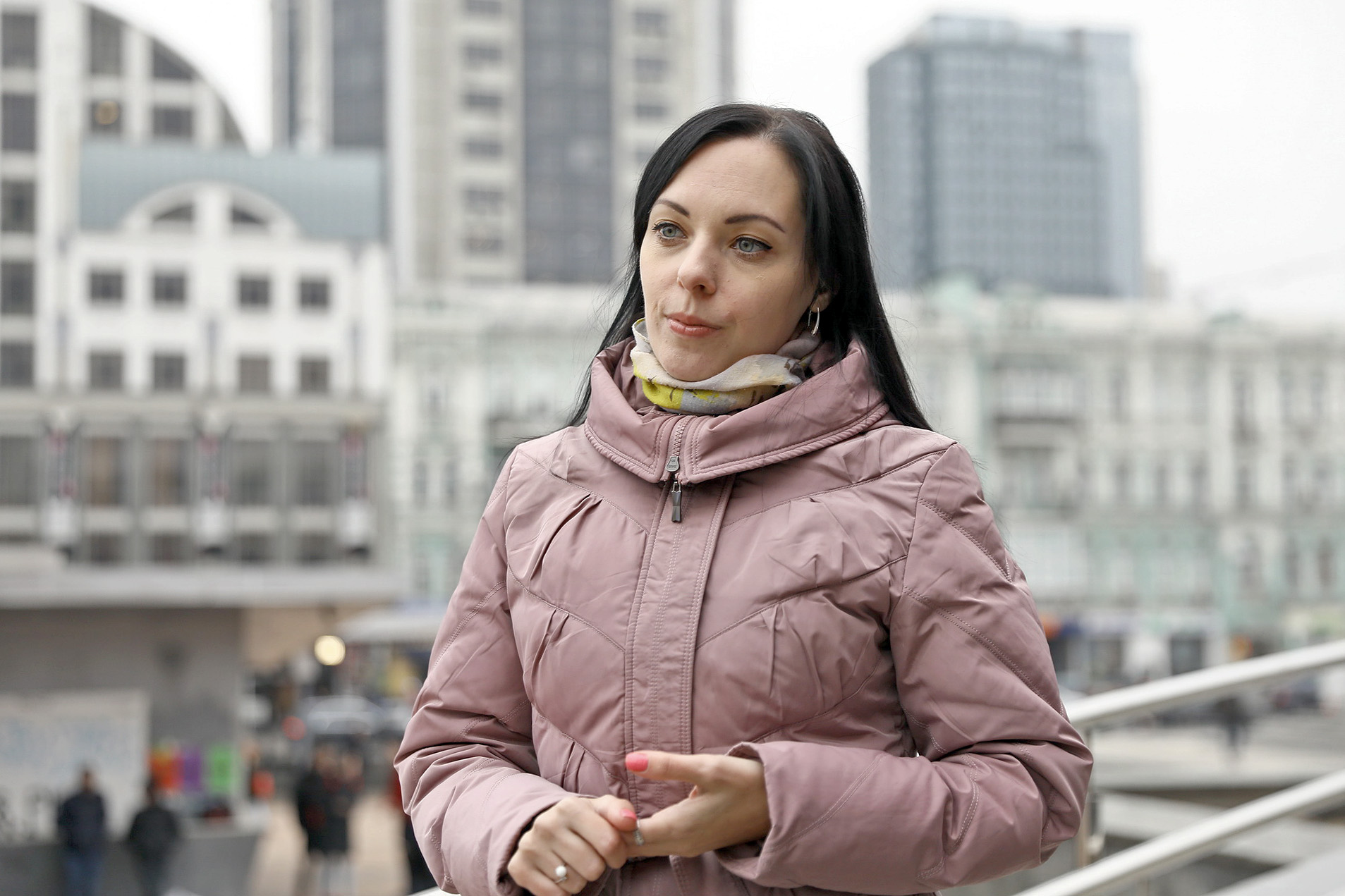 Anna Andrievska, journalist of Krym Realii TV project of the Radio Free Europe/Radio Liberty speaks with the Kyiv Post during an interview in Kyiv on Nov. 15, 2019. (Oleg Petrasiuk)

Andrievksa quit her job in protest. And when she openly expressed her pro-Ukrainian position on social media she received threats, which escalated when she started working with the Krym Realii. “I understood that Russian security services were trying to identify all people who worked for Krym Realii,” Andrievska said.

She was also threatened in a café by one of the representatives of the so-called Crimean self-defense forces. Andrievska was helping Polish journalists understand Russia’s seizure of Ukrainian territory when a man who was listening to their conversation started screaming threats.

Andrievska decided to leave Crimea in May 2014 after the Crimean self-defense squads kidnapped and robbed journalist Osman Pashaev, who was known for unbiased reporting. “This was a signal for all of us who were openly against the Russian occupation of Crimea,” Andrievska said.

She managed to leave Crimea safely, but it is not safe for her to return until Russian occupation ends.

“On March 15, 2015, the FSB searched the house of my parents. A Kremlin-backed court authorized the search in terms of the criminal case against me for my alleged call to violate the territorial integrity of the Russian Federation,” Andrievska said.

Andrievska is worried that the territory has all but disappeared from the international agenda and that the new Ukrainian government has no clear position regarding Crimea.

“I think it is wrong to say that we first have to solve the conflict in the Donbas, as if there is no war in Crimea,” Andrievska said. “While in Donbas we have the war between two armies, in Crimea there is a war of a government against civilians.”

Russia’s war against Ukraine in the Donbas started not on the war front but on the streets of eastern Ukrainian cities and towns in March and April 2014, with protests instigated by Russia, leading to the seizure of government buildings.

While journalists reported from all over the Donbas in the early stages of the conflict, soon Ukrainian and Western journalists faced threats, kidnappings and were denied accreditation.

Lukatsky worked for the Associated Press in the Russian-occupied territories in Donbas from the beginning. “I was a journalist from American media who had a Ukrainian passport issued in Kyiv. For locals I was like a double threat,” Lukatsky said. “You have to get to a press conference of a separatists’ leader or film the seizure of an administrative building without showing your documents. And that was a real challenge. Because if you show a Kyiv passport you would be arrested and taken to prison.”

After Russian-backed mercenaries seized the Donetsk Oblast council building on April 6, 2014, the dangers heightened for those from Kyiv. “Kyiv registration automatically turned you into a fascist, and they called for the armed guard. Many journalists got arrested and questioned after that,” Lukatsky said.

During the first year of the war, there was less control at the Donbas front. “To work there, the journalist had to be invisible,” Lukatsky said. “You always have to understand that while filming an attack or a murder, you might be the next. You have to be a very good psychologist. Every mistake might be the last one,” Lukatsky said.