Editor’s Note: This story is part of a special project by the Kyiv Post, “Dying for Truth,” an online database and series of stories documenting violence against journalists in Ukraine. Since 1991, when the country gained independence from the Soviet Union, more than 50 journalists have been killed across Ukraine. Most of the crimes have been poorly investigated and the killers remain unpunished. The project is supported by the Justice for Journalists Foundation. Content is independent of donor.

Andrea Rochelli, 31, an experienced Italian war photographer and co-founder of Cesura, a collaborative of independent photographers, was used to working in conflict zones around the world. He came to Ukraine in 2014, the first and deadliest year of Russia’s ongoing war against Ukraine that has already claimed more than 13,000 lives.

In the meantime, Vitaly Markiv, 25, an ethnic Ukrainian from Italy, was fighting the Russian-backed separatists in the Donbas.

Markiv, who lived in Italy with his parents for 12 years, returned to Ukraine to take part in the EuroMaidan Revolution in the winter of 2013–2014.

After the 100-day uprising ousted Kremlin-backed President Viktor Yanukovych, Markiv decided to join the National Guard of Ukraine and continued fighting for Ukraine’s independence from the Kremlin.

The fates of these two men were deeply connected.

On May 24, 2014, a car carrying Rochelli was hit by a mortar near Sloviansk, a city in eastern Donetsk Oblast then occupied by the separatists, killing him and Russian journalist Andrey Mironov, who served as a translator for Rochelli.

Five years later, Markiv, whose platoon was based some two kilometers away from where Rochelli died, was sentenced to 24 years in an Italian prison for the photographer’s murder. The court decided that Markiv coordinated the mortar fire that killed Rochelli. He has repeatedly denied the accusations.

Markiv had never met Rochelli, unlike many other Italian journalists who frequently addressed him for comments: first about the EuroMaidan Revolution and then the war in the Donbas. A Ukrainian soldier who spoke Italian, he was a desired source and commentator.

“He didn’t even know Rochelli, unlike the other journalists he had been frequently in contact with,” Diana Markiv, Vitaly Markiv’s wife, told the Kyiv Post. “He was trying to tell the Italians the truth about what was happening in Ukraine. Now those journalists testify in court against him.”

It didn’t even help that Markiv’s squad had no mortar weapons and therefore just could not have started the shelling that killed Rochelli.
On Oct. 11, the Court of Pavia, Rochelli’s hometown, is supposed to deliver the motivational part of its ruling, explaining why it sentenced Markiv to 24 years in prison.

Meanwhile, the Security Service of Ukraine has not finished its investigation into the death of Rochelli and Mironov. The investigation was started in 2014. After the Ukrainian security service failed to provide rapid result to Italy, Italians decided to act on their own. They ignored Ukraine’s request for cooperation and conducted their own investigation that led to Markiv’s imprisonment.

However, Ukrainian law enforcement already say Markiv had nothing to do with the murder.

“The materials of the criminal case do not feature any evidence of Vitaly Markiv having any connection to the shelling that caused the death of both Mironov and Rochelli,” the SBU press service told the Kyiv Post, refusing to disclose additional details due to the secrecy of the investigation.

Not waiting for the Ukrainian side to complete the investigation, Italy moved to do justice on its own. In June 2017, the Italian police arrested Markiv, who came to Italy with his wife Diana for vacation.

With the help of Italian journalists and French photographer William Roguelon, who was also in the car with Mironov and Rochelli but survived the shelling, the court sentenced Markiv to 24 years in prison — longer even than the 17 years requested by prosecutors.

The case against Markiv was based mostly on testimony from Reguleon and Italian journalists Ilaria Morani and Marchello Fauci, who also worked in the Donbas in 2014 and returned to gather information on Markiv in 2016.

In their testimony, Morani and Fauchi cited an anonymous soldier they spoke to the day Rochelli died who reportedly said he was directing the shelling that killed Rochelli and Mironov and wounded Roguelon. Both journalists refused to identify the soldier, but prosecutors said it was Markiv.

The soldier reportedly served in the Ukrainian Army and said that while the Army does not shoot at civilians on purpose, the positions near Sloviansk were crucially important, and at the time soldiers were shooting every moving target in the area.

After the Italian investigators discovered that Markiv’s platoon had no mortars, they changed the accusations, accusing Markiv of informing the Ukrainian Army about the presence of the journalists in the area. And the Army started shelling.

Francesca Volpi, another Italian journalist who testified in court, also said in her testimony that she knew Markiv, and in one of her stories from Ukraine she reported that Markiv speaks perfect Italian and used to live in Italy and that he has an Italian passport.

“The Italian justice machine has chosen Vitaly just because he was a Ukrainian with [an] Italian passport who took an active part in the war in the Donbas,” Diana Markiv told the Kyiv Post.

The Prosecutors Office of Pavia did not respond to the Kyiv Post’s request for comment.

Ukrainian Prosecutor’s Office claimed that the evidence their Italian colleagues used in trial was not solid. However, after the Italians arrested Markiv, Prosecutor General Office of Ukraine offered them to create a joint investigative group but it was ignored, Eugene Enin, former deputy prosecutor general of Ukraine told the Kyiv Post on Sept. 12.

Enin first heard about Rochelli’s death when he was still working as an aide to the Ukrainian Ambassador to Italy in 2014.

“Our Italian colleagues kept saying the Ukrainian government has to give answers to the Italian society. They kept saying it was a matter of principle,” Enin recalled.

In 2016, Enin joined the General Prosecutor’s Office of Ukraine, which continues to oversee the investigation into Rochelli’s and Mironov’s deaths.

“The Donetsk Oblast prosecutors kept providing only one answer — we are still investigating, doing everything we can. However, the crime was still unsolved,” Enin said. “So the frustrated Italians kept pushing.”

It was only after Markiv was arrested in 2017 that Ukrainian law enforcement found out that their Italian counterparts had been investigating Markiv for a year, wiretapping his parents and waiting for him to come to Italy.

“After his arrest, we initiated the communication on all levels. Together with the SBU head, I prepared the letter for the Italian government asking them to come here to study all the evidence we have in this case, but that was in vain,” Enin said.

“Italians refused to cooperate with us. All our proposals were ignored. Unlike in Ukraine, the Italian government can’t force the prosecutor to… cooperate in a certain case. Their law enforcement system is independent.”

At the same time, Enin said, Ukrainian law enforcement understood that Italy had no evidence that would prove Markiv’s role in Rochelli’s death.

He was not in the Ukrainian Army, as Italian journalists and prosecutors presented him to be. His battalion was subordinate to the National Guard of Ukraine and was armed with no mortars, only guns.

“At some point prosecutors and the court of Pavia, Rochelli’s hometown, became hostages of the infuriated Italian society,” Enin said.

And the Italian media, as well as some other journalists, played a crucial role in fueling that fury, according to Oles Horodetskyy, an activist and the head of the Christian Community of Ukrainians in Italy noted. Horodetskyy has played an active role in the trial process as a defender of Markiv.

Ukrainian news media Hromadske journalist Olga Tokariuk, who has been reporting on Markiv’s trial for more than two years from Italy and Ukraine, confirmed that most of the stories were one-sided.

“The Italian media never wanted to know our side of the story. Vitaly’s lawyer wanted to speak to them, but they ignored him. From the first day they labeled Vitaly a killer,” Diana Markiv said. 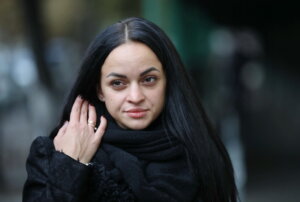 The role of media

When Russia unexpectedly launched the war in the Donbas in 2014, Ukraine was unprepared, without an army capable of defending the country against Russian aggression. Hundreds of volunteers, including Markiv, went straight from the EuroMaidan Revolution to war-torn Donbas.

During the first months of the war, the Donbas frontlines were chaotic, not completely controlled by either side and therefore extremely dangerous.

The hundreds of foreign journalists who came to report on the new war in the center of Europe did so in a mixed spirit of thrill seeking and war tourism and at great personal risk.

Attanasio recalled that a lot of his colleagues were hunting for sensational pictures that would make them famous but had no clue on how to behave in a conflict zone.

One of them was the French photographer William Roguelon, who used to travel with Attanasio and a small group of foreign freelancers.

“He was completely ignorant of what was happening in the Donbas. For example, once he suggested going to Dnipropetrovsk as he wanted to shoot the separatists’ on barricades there. He didn’t even know there were no separatists’ barricades there ever,” Attanasio remembered.

Roguelon also frequently put the lives of his colleagues in danger, trying to shoot photos at the checkpoints of separatists in Donetsk and Luhansk oblasts.

At some point Roguelon and Attanasio separated, and soon after Roguelon joined Rochelli and Mironov.

They were both more experienced conflict reporters. Their last piece was published in the Russian Novaya Gazeta newspaper on May 19 2014, five days before they died in shelling. The story featured mostly pictures of two families, living in Sloviansk, claiming that the Ukrainian army had been shelling them.

“This story was used as evidence in court, as if Rochelli and Mironov published the truth about suffering civilians in Sloviansk and had immediately become a target for the Ukrainian army for telling the truth,” Tokariuk said.

During his testimony on Dec. 6, 2018, Roguelon, now the main witness in Markiv’s case, said that on May 24, 2014, somebody called Mironov and told him about the village of Andriivka that was recently shelled. So all three decided to go there and report about what happened.

Roguelon said all three passengers in the car that belonged to the Vivat Taxi firm had been wearing civilian clothes but had huge cameras with them.

They were heading to Andriivka but decided to stop to shoot an abandoned train Russian-backed separatists had left near Karachun Mountain.

The Ukrainian military was positioned at Karachun Mountain and the separatists were positioned at the Zeus Ceramics base, several kilometers to the East, the journalists were suddenly caught in a battle that erupted in one of the most important battlefronts of Russian war against Ukraine — Sloviansk.

The Ukrainian Army took control of Sloviansk in July 2014, a big victory in Ukraine’s effort to take back its territories from Russia. Nowadays Sloviansk is a peaceful city.

However, the Italians have always had a slightly different view of the Ukrainian-Russian war, Tokariuk said. They have always had sympathy for the Russia-backed separatists in eastern Ukraine and see them as “fighters for freedom.”

“We can begrudge at the Italian injustice as long as we want, but the best response to this would be to conduct an effective investigation into the deaths of Rochelli and Mironov and deliver the result,” Enin said.

Roguelon did not respond to repeated requests for comment for this story.